Image: Coordinator of Alumni Engagement at OCAD University, Danyil Panasyev stands in the kitchen at C'est What? restaurant where he is also the Kitchen Manager. Panasyev has been working in kitchens for 15 years and cooking for almost a decade.

Danyil Panasyev is the Coordinator of Alumni Engagement at OCAD University. He and his family are from Kyiv, the capital and most populous city of Ukraine, a country that has been upended by war since Russia’s invasion in February 2022.

According to the United Nations, almost 13 million people have fled their homes in Ukraine since the war began. More than six million have left for neighbouring countries and at least another 6.5 million people are displaced inside the country itself.

Aggrieved by the devastation he’s witnessed from thousands of kilometres away, Panasyev wanted to take action and help. He has teamed up with Natalie Pavlenko, Strategic Communications Officer at OCAD U who also has Ukrainian roots, to organize a fundraiser that asks, “C’est What? Can you do for Ukraine?”, presented by the Ukrainian Canadian Congress.

“I acknowledge that I have privilege living in North America. I came here with my mother, who raised me by herself,” Panasyev shares. “Now, more than ever, is my time to give back in any way I can. Never has the Ukrainian community, including those who have come and are coming to Canada, needed more support,” he continues.

Guests are invited to arrive at the fundraising event any time between 6 to 10 p.m. on May 30 at C’est What? in Toronto, where Panasyev is the Kitchen Manager, in addition to his role at OCAD U. Located at 67 Front St. East in Toronto, a two-minute walk from the St. Lawrence Market, the restaurant jumped at the chance when asked to lend a hand.

The dinner and concert will support people displaced by the war arriving in the Greater Toronto Area (GTA) with very few belongings, through donations that will go to the Toronto Ukrainian Foundation. Tickets can be purchased in advance online for $100 and for $125 at the door and include a full-course meal and performances by StarDust Jazz Duo, violinist Viera Zmiyiwsky and Ukrainian folk band Korinya. The evening’s à la carte menu will include borscht, a traditional Ukrainian soup made with beets and typically served with sour cream. Dinner can be ordered until 9:30 p.m.

“My hope is that this event will raise much-needed funds for Ukrainians displaced by war and boost awareness of this massive humanitarian crisis,” Pavlenko notes.

The fundraiser is co-organized by Irene Solomon, a friend of Pavlenko’s and a board member of the Toronto branch of the Ukrainian Canadian Congress. Solomon is an active member of Toronto’s Ukrainian community in addition to her work in the television industry.

“My parents were born in Ukraine, and although I was born in Toronto, I grew up with deep ties to Ukrainian culture and the Ukrainian community,” says Pavlenko.

“As the daughter of Ukrainian refugees who endured the horrors of the Second World War and the Holodomor (the Soviet-made famine of 1932-33), I am shocked and enraged that history is repeating itself,” she continues.

For those who are unable to participate in the event in person you can still donate to the Toronto Ukrainian Foundation and the Ukrainian Canadian Congress-Toronto Branch’s joint campaign via their website. Funds will support Ukrainians affected by the war to settle in communities across the GTA.

Department
Marketing and Communications Alumni
Keywords
fundraiser fundraising
News Summary
Tickets are currently on sale for the May 30th dinner and concert fundraiser to be held at C’est What? in Toronto.
Date
Thu, 05/19/2022 - 10:54
Banner Image 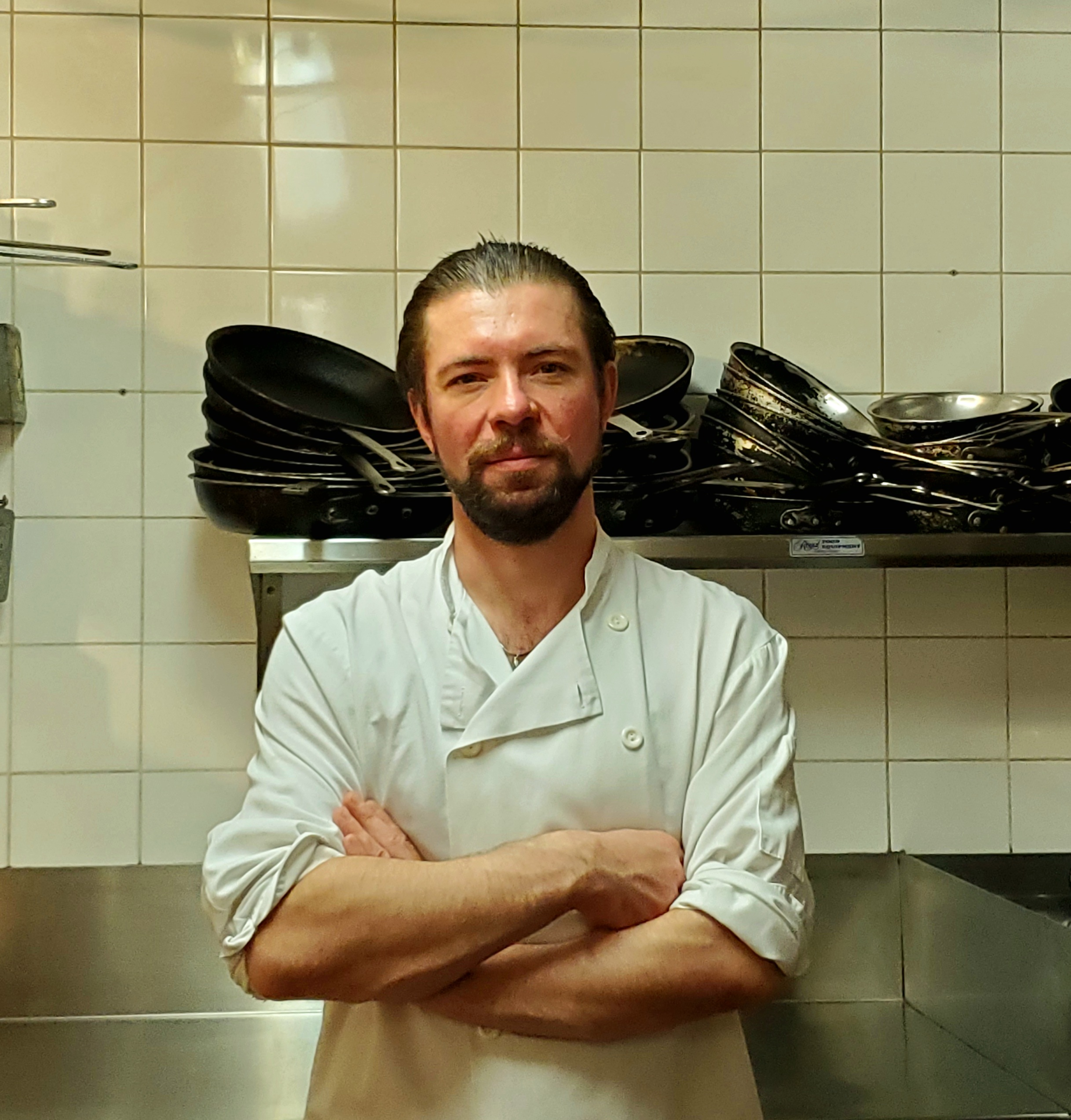 We continue to declare our solidarity with the Wet'suwet'en, their hereditary leadership, and all land protectors across Turtle Island. The Indigenous Student Centre will again be selling these T-shirts to support Wet'suwet'en Land Defenders.

OCAD U students, faculty and staff can purchase a T-shirt for $20 (cash only) at the Indigenous Student Centre (113 McCaul Street, Annex Building, 4th Floor, Room 410), between 10AM-5PM (closed from 12-1) on the following dates: Thursday December 2, Tuesday December, and Thursday December 9

OCAD U students are able to pay what you can. Please note there will be no public sale at this time​. We are planning to hold a public sale in January 2022.

We also want to let members of the OCAD U community know, that we have a number of Orange toques (featuring artwork by Mariah Meawasige) still available from our Every Child Matters fundraiser. These toques are also available for $20 cash only, to support We Matter and Save the Evidence. They can also be purchased at the ISC during the T-shirt sale. Toques and t-shirts are available to Indigenous OCAD U students at no-cost 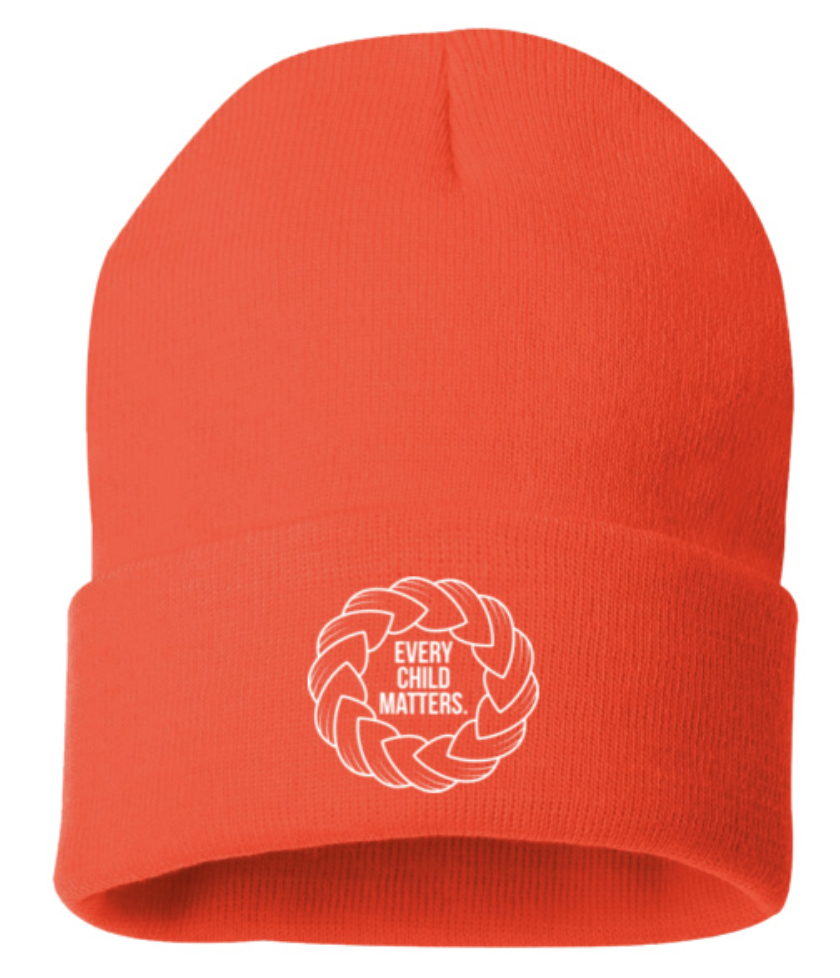 The Indigenous Student Centre will be selling orange toques for $20 (cash only) to raise funds for the Orange Shirt Society. The artwork in the hat design, featuring interlocking hands made to resemble a sweetgrass braid, is by OCAD U alumni Mariah Meawasige (Serpent River First Nation).

Where can I purchase a toque?

OCAD U Sale – OCAD U students, faculty and staff can purchase toques from the Indigenous Student Centre (Annex Building -113 McCaul Street, Level 4, Room 410) Monday-Friday 9AM-5PM starting on Monday September 19. Toques will be available for Indigenous OCAD U students at no cost, for a limited time. To request a toque, please contact rkennedy@ocadu.ca by Wednesday September 21.

On September 30 2022, classes will be cancelled. Orange Shirt Day, is now also recognized as the National Day for Truth and Reconciliation. Orange Shirt Day was started by survivor Phyllis (Jack) Webstad. Phyllis was gifted a new orange shirt by her grandmother for her first day of school. Her shirt along with other items, was taken away on her first day of residential school at St. Joseph's Mission in British Columbia. Orange Shirt Day is held annually on September 30. See more events happening at OCAD U from September 26 to 30, 2022, to commemorate the National Day for Truth & Reconciliation.

The Indigenous Student Centre will be closed on Friday September 30.

Need someone to talk to?

The list below contains 24/7 support services for Indigenous people.

On December 6th the OCAD University community gathered to raise just under $5000 to assist in the rebuilding of the Tahltan Nation Community through the sale of photo-documentation. The event was also a celebration of the end of the calendar year in Graduate Studies.

A thank you from Peter Morin:

I don’t think I can add anything. Except for gratitude. It means so much that we can send love, and money, to folks back home. So much was lost. homes. structures. memories. Fire can takes away everything that we imagined as home. Its important that we can help out those in need. Its also important to recognize and prioritize decolonization methodologies and send back resources to Indigenous territories and communities. Meduh to everyone who could donate, Meduh to everyone who sang. Meduh to everyone who shared their good energy and joy during our event. We did good. The Tahltan Nation, and communities across the country, have been working tirelessly to help our community members return home by the end of December. There is still a lot of work to do but we make it easier when we work together.

See photos of the event by Arash Safavi 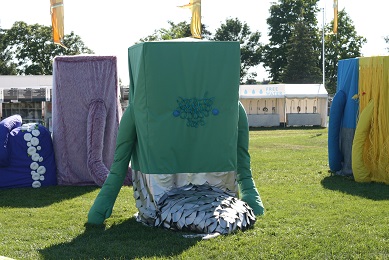