The Watering Hole: A Conversation

If you could have lunch with one person from Black history, who would it be?

Seven OCAD U faculty members will reflect on this question at this Friday’s edition of The Watering Hole, in celebration of Black History Month. Tune in, as acclaimed faculty and staff share research interests, current projects and their academic and creative ambitions. This event takes place on Zoom and is open to the public.

The Watering Hole is a series of salon-style discussions between artists, community actors, students, and faculty. Join us for an illuminating and thought-provoking discussion with members of the Black Caucus.

Organized by the Creative Writing Program at OCAD University and the Black Caucus.

Lillian Allen
Lillian Allen is a Professor in the Faculty of Arts & Sciences at OCAD University. Two time Juno Award winner and trailblazer in the field of spoken word and dub poetry, Allen artistically explores the aesthetics of old and new sounds in music to create her distinctive leading edge brand of Canadian reggae with new world sounds in her poetry recordings, with her powerful reggae dub poetry/spoken word recordings including her latest single Woken & Unbroken (2018), album ANXIETY (2012), her groundbreaking first solo Juno award winning album Revolutionary Tea Party, a Ms. Magazine Landmark Album, followed by another Juno winner, Conditions Critical. Her third album, Freedom & Dance and her recording for children and young people, Nothing But a Hero, were released to critical acclaim.

Kestin Cornwall
Kestin Cornwall is an Assistant Professor in the Faculty of Design who grew up in the Windsor, Ontario area. His father is Grenadian, and his mother is American. He spent much of his youth in Detroit, Michigan, with his family. In 2001 he moved to Oakville, Ontario, to begin his training at Sheridan College Institute of Technology and Advanced Learning. Over the past ten years, Cornwall has focused on creating relevant progressive art. Cornwall's work aims to ask questions regarding equality, immigration and what it means to be Black in North America. Cornwall uses images to explore the notion that culture, entertainment, including film and other media, shape the mass public perception of Black people and people of colour in North American society.

Dr. Camille Isaacs
Dr. Camille Isaacs is an Associate Professor in the Faculty of Arts & Sciences at OCAD University. Her research focuses on the Black Atlantic region, everything from the Black British idiom as shown in Zadie Smith's work, to West Indian inclusion in the Harlem Renaissance, to the burgeoning Black Canadian literature of Esi Edugyan. Dr. Issacs is especially interested in how identity shifts between ethnic and racial markers, particularly for Black people in North America.

Michael Lee Poy
Michael Lee Poy is an Assistant Professor in the Faculty of Design at OCAD University. He earned a Bachelor’s in Architecture from Pratt Institute of Technology in 1995 and a Masters in Environmental Design from Yale School of Architecture in 2004. While in New York, he established himself as an emerging installation artist in several group shows and designed/fabricated masquerade costumes for Peter Minshall in Trinidad’s Carnival. Born and raised in Montreal, Canada, Lee Poy is now a registered architect in Trinidad and Tobago and was on the executive board of the Trinidad and Tobago Institute of Architects (TTIA) as Honorary Secretary and Chair of Education. Before founding Atelier Lee Poy Ltd. in 2007, he worked in Trinidad as a junior architect at acla:works.

Esery Mondesir
Esery Mondesir is an Instructor in the Faculty of Art at OCAD University. He is a Toronto-based filmmaker who was born in Port-au-Prince, Haïti. He worked as a high school teacher, a book designer and a labour organizer prior to receiving an MFA in cinema production from York University. His work, which includes documentary, fiction and experimental narratives, takes a critical stance on modern-day social, political and cultural phenomena to suggest a reading of our society from its margins.

Peter Scott
Peter Scott is an Instructor in the Faculty of Arts & Sciences. His background includes business management, executive education-programming, from the Rotman School of Management, University of Toronto, Executive Programs. He holds a Master’s Degree in Design in the Strategic Foresight and Innovation program at OCAD University. His research focus includes integrative and design thinking, entrepreneurship, social innovation, social finance and micro-finance.

Dr. Alia Fortune Weston
Dr. Alia Fortune Weston is an Associate Professor of Creative and Business Enterprise at OCAD University in the Faculty of Arts & Sciences. Through her research and practice Dr. Weston explores the intersection of business, creativity and social change. She takes a critical theory perspective to question dominant research paradigms and redefine how we understand knowledge; exploring themes such as critical business practice, economic sociology, creative work in resource constraints, community empowerment and innovation and experiential food methodology.

Join OCAD U faculty members as they reflect on the question, "if you could have lunch with one person from Black history, who would it be?" at this virtual public event. 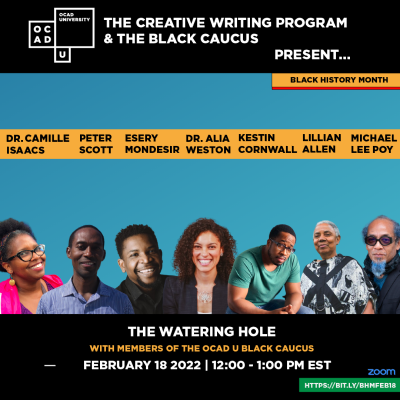 Let's fire up the BBQ with Rei Pierre

Juneteeth is a day of celebration which is gaining more recognition across Turtle Island. Beginning 1865, it's the oldest nationally recognized day to commemorate the end of slavery in the USA. The day is much more than celebrating the end of slavery - the day emphasizes education, achievement, and jubilation.

This event is part of the Student Wellness Centre's PHOENIX RISING initiative to support joy and wellness for black OCADU students by black students.

For this event, allies can show up and support, learn more about Juneteeth independently, like or share promotion on Instagram. Social Media Accounts will be blocked at the discretion of the Student Wellness Centre for promoting white supremacy, racist comments, and or microaggressions. Good vibes only.

Come together to celebrate Juneteenth safely with Student Wellness Navigator Rei and friends.

This lecture pursues a comparative exploration of slave dress, cultural preservation, and self-determination in Canada and British Caribbean islands like Jamaica and St. Vincent. Recuperating the histories of three enslaved black women-- Dutchess, Florimell, and Cash-- and one enslaved black man, Andrew, it explores how they acquired the means and materials to adorn, protect, and beautify their bodies amidst endemic material deprivation, cultural prohibitions, economic disenfranchisement and pervasive physical violence. Drawing on Rebecca Earle’s concept of “clothing acts,” the lecture examines genre studies, portraiture and fugitive slave advertisements to explore the spaces between the imposition of cloth rations in tropical planation regimes like Jamaica, the use of European second-hand clothing in Canada and the preservation of African cultural dress practices like headwrapping across the Americas.

Charmaine A. Nelson is a Professor of Art History and a Tier I Canada Research Chair in Transatlantic Black Diasporic Art and Community Engagement at Nova Scotia College of Art and Design (NSCAD) University in Halifax, where she is also the founding director of the first institute focused on the study of Canadian Slavery. Nelson has made ground-breaking contributions to the fields of the Visual Culture of Slavery, Race and Representation, and Black Canadian Studies. 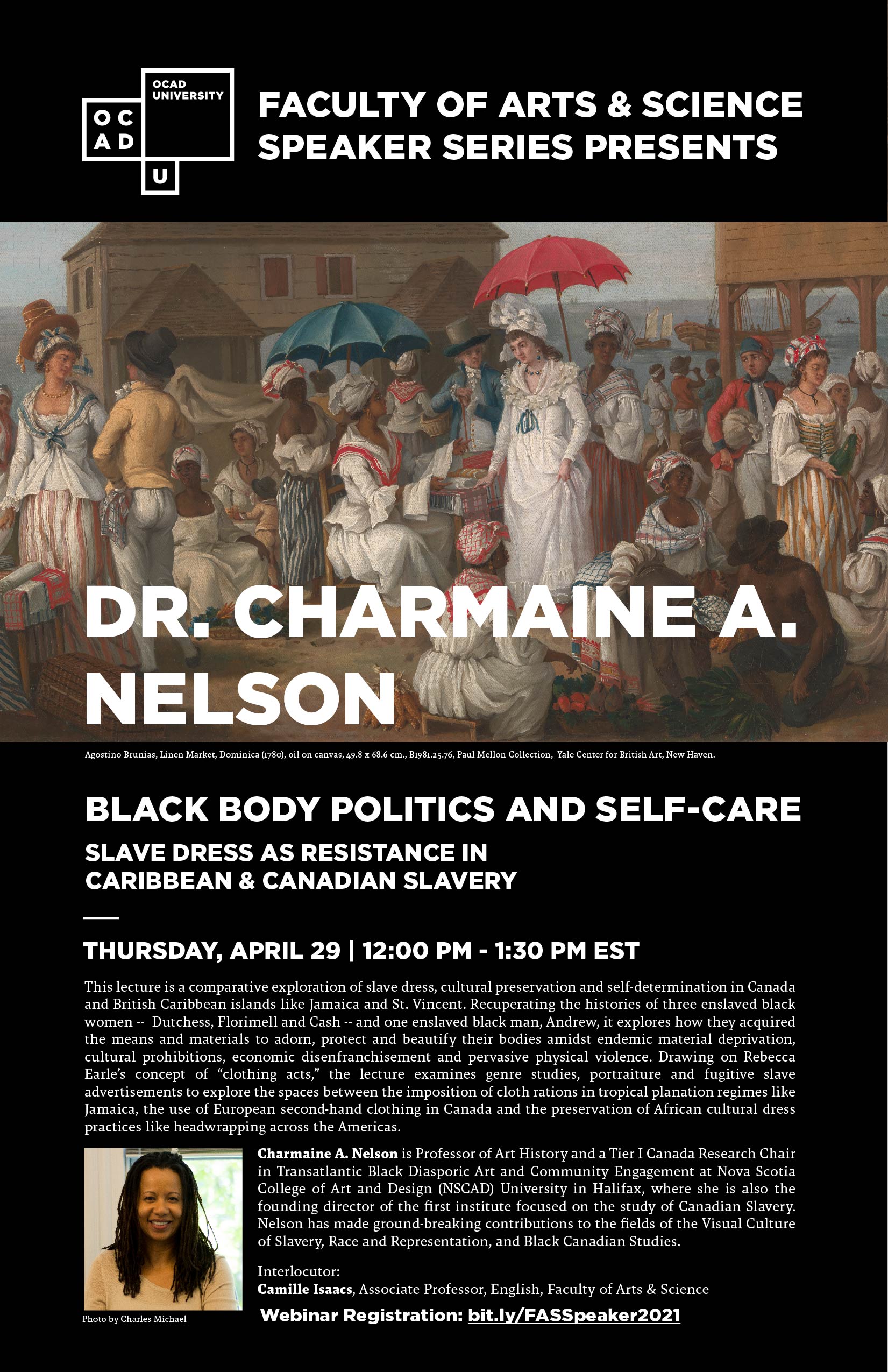 Please join the Faculty of Arts & Science for a guest lecture by Dr. Charmaine A. Nelson. The lecture pursues a comparative exploration of slave dress, cultural preservation, and self-determination in Canada and British Caribbean islands like Jamaica and St. Vincent.